EUGENE K MOON
Acoustic Cases is a series of large instruments mostly built without the reliance on electricity or wires. I am interested in analog objects because they are built in ways artists and craftsman create to achieve the object's intended goal as they weave through and manipulate with the limitations of the law of physics that 21st century objects can largely bypass, e.g. mp3 vs. phonograph. It is through these limitations that the creators built appendages and fixtures on their crafts that not only make their creations function the way they wanted but simultaneously create an aesthetic representation of those objects. I will be creating a series of large instruments that will function with acoustic amplification together with aesthetic pursuits, however minimal or maximal the design.

104.14 x 57.2 x 123.2 cm. (41 x 22.5 x 48.5 in.)
Wood and 10 ft. Copper tubing, 2014
﻿﻿
The Stereo is an amplifying box that no wires or electrical devices built inside. It replicates the modern amp in design with the acoustic container to amplify sound and the copper tubing that passes acoustic vibration from an instrument, such as the Jaty Xan in the images, is like a cord. An instrument or any sound source is attached to one end of the copper tubing. Sound travels through the tubing from the source on end and through a funnel attached to the other end of the tubing inside the Stereo. The interior of the Stereo is built like the internal structure of an electric stereo with multiple walls to bounce sound inside the box as the vibrations pass through the upper area of the box with sound holes. The walls around the sound holes are for listeners to sit inside to listen to the instrument (Jaty Xan in the picture) as the walls block off any external sounds to not drown out the acoustic music. 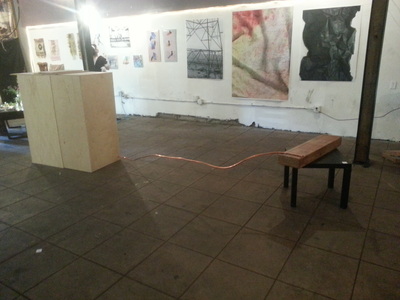 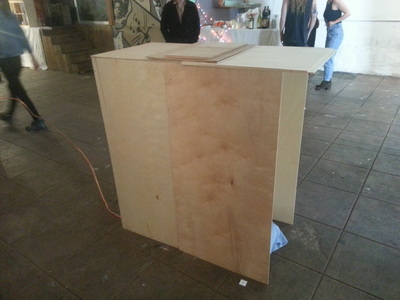 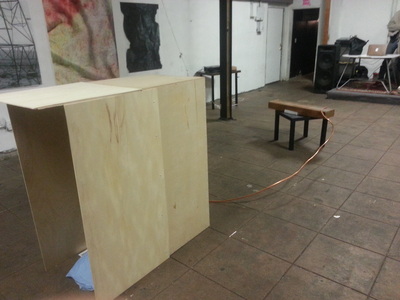 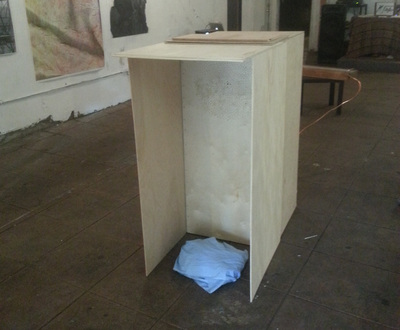 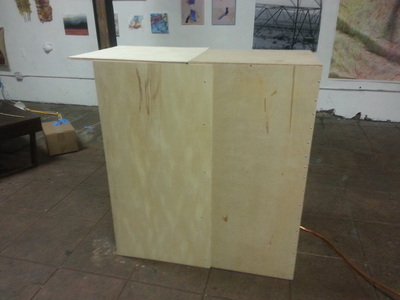 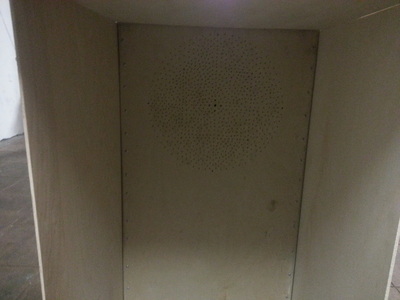 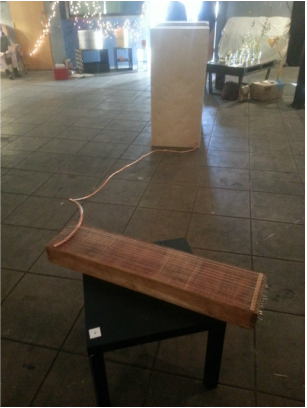 60.96 x 121.92 x 60.96 cm. (24 x 48 x 24 in.)
Wood, snare drum, felt, nylon string, and bolts, 2014
The Ghirarumori is a combination of both the Ghironda or Hurdy-Gurdy and Luigi Russolo's Intonarumori. The inspiration is based on the continuation of my first piece, the Stereo, which led to my research into the Intonarumori, which is physically similar to the Stereo. However, most of Russolo's pieces or his replicas produce a single pitch with a lever that either tightens or loosens the string. I thought about recreating the Intonorumori where it can be played with defined pitches, which is where I added the inspired Hurdy-Gurdy mechanics into it. The player would play this instrument by standing near the corner of the instrument where the crank is located. The crank turns the wheel inside the instrument and bows the string. The string is attached on one end in the center of the drum skin, which acts as a resonator and creates sound as the string vibrates the membrane, similarly to a phonograph. The levers in front of the player are keys, like a piano, where pressing on the keys stop the string at certain lengths, creating the desired pitch the player wants to play. There is a pedal on the bottom of the instrument, where the player can press the pedal to tighten the tension of the string to raise the pitch of the string. 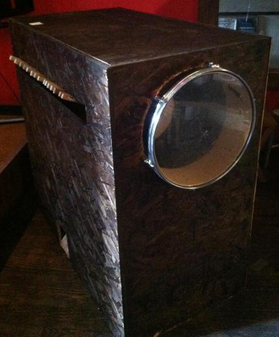 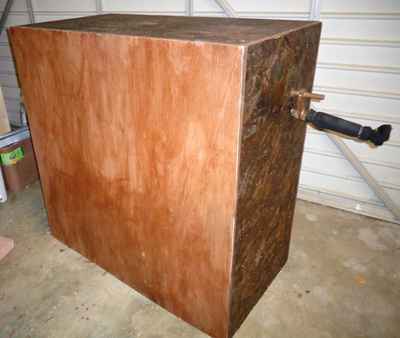 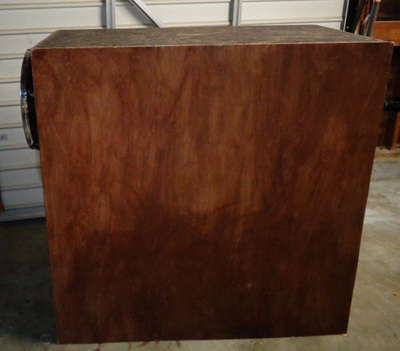 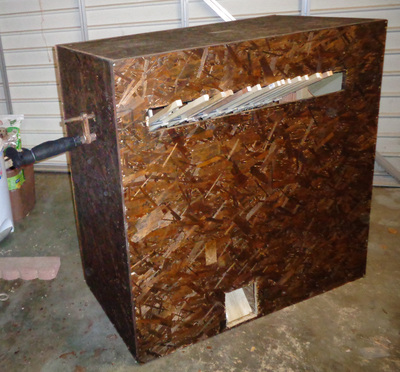 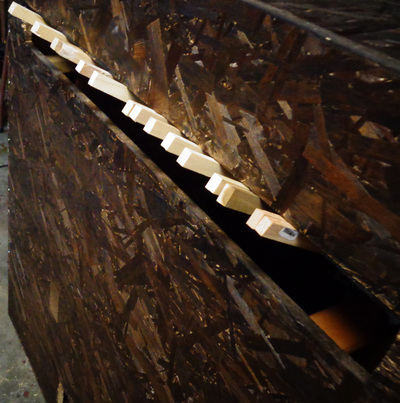 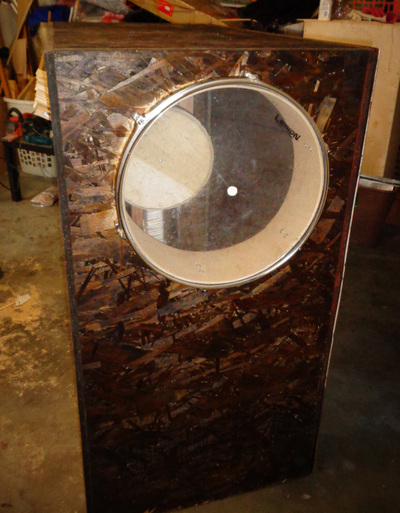 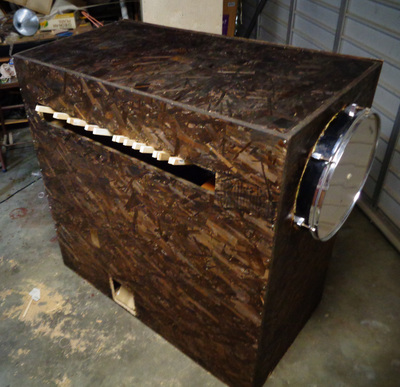 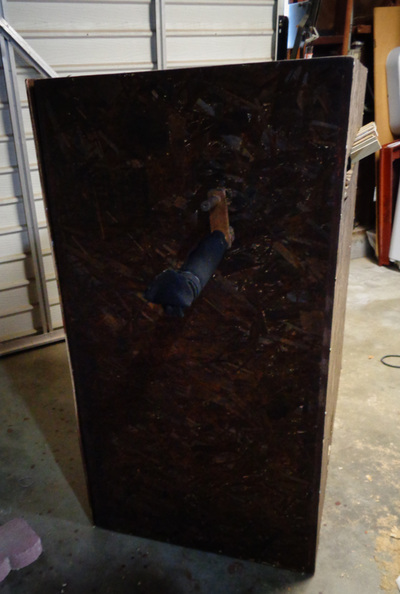 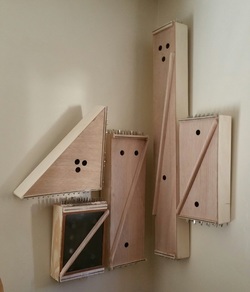 The intent of the piece is similar to the Acoustic Series but it is accurately its own      concept. For more information, see the page Sympathetic Response.