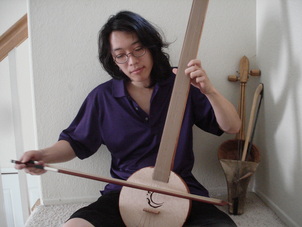 Playing the Tal with Kyl Kyiak from Kyrgyzstan in the background.
Eugene Moon is an artist based in Los Angeles. He finished his bachelor degree
in Art from the California Institute of the Arts.

Eugene's work consists of musical instruments he created as well as paintings. His works draw influences from his study in history, language, culture, and ethnomusicology, especially how cultures and traditions have been altered or adopted through trading ideas, goods, music, etc. He has collaborated with artist and writer Kenyatta Hinkle and musician Kevin Robinson on the Kentifrica Project and recreated the country's musical instruments.

Besides making instruments, he also performed music with Burat Wangi Gamelan and the Calarts Persian Ensemble. He also improvises with his musical instruments.
He started a collection of musical instruments from around the world.
He plays gayageum (Korean zither).